Shame what turned out to be a very gentle ribbing was pulled from tomorrow’s Jonathon Ross show.  Looks like Peter Fincham is afraid to lose another job.

Although it baffled some people it seems that I’m not the only person who has heard of Rondò Veneziano’s La Serenissima. Some kind, but anonymous soul has sent me a link to the video in the comments field.

Anyone else remember this now?

Have you ever had an image in your mind’s eye? An image so real it has to be a memory, albeit a memory whose origins are lost in the haze of youth.

Ever since I can remember, I’ve recalled an animation of Venice’s final moments where the watery city falls into the sea while a string quartet with smooth faces of reflective glass played a classical piece. Thanks to the magic of last.fm radio I’m no longer haunted.

A piece by Rondò Veneziano reminded me of the Live at 3 theme tune back from old school RTÉ. When I went searching about the band, I found out that my memory was a video for one of their songs.

Nice to know I wasn’t hallucinating.

Good. You know your music. You should be able to
work at Championship Vinyl with Rob, Dick and
Barry

It looks like someone noticed the badger shouting at the last Broken Family Band gig.

Of course my drunken heckling hasn’t reached the standards of Ferg, who questioned the existence of God at The Comedy Cupboard.

Inertia strikes again. Not only had I not been to a gig in ages, I go to two in a week and don’t bother reviewing them. I’m feeling lazy so I’ll only tackle the first one for the moment.

On the 25th of September I went to see The Broken Family Band at the Arts Cinema in Cambridge. It’s the first time a concert’s been played there and I have to admit it was quite strange standing in a fairly well-lit bar-type atmosphere watching a band.

First up was Candidate (which through some strange quirk of acoustics I thought were called Pieces of Eight) which seemed pretty good quite jolly and acoustic. A conversation about Badgers set up what was to happen later on.

The main band themselves were on good form, singing a mixture of new and old stuff and they really seemed to enjoy themselves. Because of the badgers, it became an ad hoc cheer after each song (well for two of us, at least) and when we got a little rowdy it ended up confusing the band. So much to that “I Don’t Have the Time (Too Mess Around)” was changed to refer almost exclusively to badgers.

Elbow review in a day or two, followed by Frank Black and the Catholics. 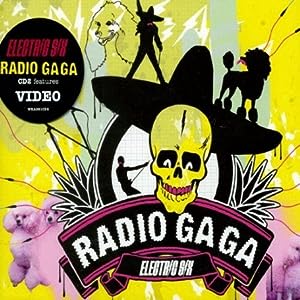 Okay so I said that The Cooper Temple Clause were bloody brilliant but tonight’s gig surpassed even that. Electric Six were even better, surpassing all levels of the Ryan Rating System and bring about a new grade of gig coolness. They were “Fuckin’ Deadly”. They rocked pretty much with the stuff that I hadn’t heard, but once GayBar came on I found myself sucked into a pit of moshing joy from whence I didn’t emerge for an hour.

A mix of disco, heavy rock, punk, and a stage presence to rival Sir Lawrence Olivier made for the perfect gig to bounce around to like a mad thing and bounce around I did. I imagine I’ll be unable to walk in the morning but it was very much worth it. Especially with their well-timed monarch dissing, and the slightly ironic timing of their cover version of Radio Ga Ga, which confused the younger members of the audience.

Seeing as I haven’t been to The Junction is ages, this was a perfect re-introduction. In my love for smaller venues I’d forgotten just how much of a buzz it can be to be smack in the middle of a big crowd all getting down to the same music.

The support band, Ambershades, were not anyone I’d heard of before but carried themselves off very well in the face of an uninterested crowd. Very melodic pop, with a tinge of Status Quo, but only the good stuff. I’ll be listening out for them in future.

Of course there was the usual jockying to get into a good position for the headliners, The Bluetones, and this time we managed to get closer to the stage than ever before in The Junction. I’d not heard much of this lot’s music either, but they came highly recommended and quite rightly so. A mixture of The Jam and Primal Scream with a harder edge to it, they absolutely tore the place down. The normally quite staid Cambridge crowd went mad with excitement and there was much pogoing and screaming to be had. I even lost it myself, in spite of the ties being worn by the band, and went ballistic. The lead guitarist was one of the best I’ve ever heard live and indeed deserved the man of the match award.

Yes I know it’s been a while, but I haven’t been to a gig in ages. Tonight was Harvest Time at the Portland Arms and, as usual, The Broken Family Band were headlining. It was a very poor turnout gigwise, with only myself and Red Setter attending, but turned out to be absolutely smashing.

First up was Rob Jackson and friend. The singer was pretty good in a James Taylor style and Rob’s lead guitar led to a fairly mellow but toneful start to the evening’s proceedings.

Lionshare are another band much in the Americana mold. Having a bad start where I was tempted to head to the bar, they got into the swing of things with some dark, almost gothic, country style music. Filled with harmonica, textured guitar, and a growling Johnny Cash type voice I do believe they rawked.

The Broken Family Band this time around played a lot of new stuff which will be on the album, aparantly coming at the end of June. Of course, they played old favourites like Twisted and The Devil’s in the Details but I think the highlight for me was Walking Back to Jesus: Part I, which was nice and Pink Floydy for my tastes.

Another highlight of the evening was witnessing Red Setter’s change from relative gig virgin to full fleged groupie. I feel so proud since she left with both a t-shirt and CD and chatted to the band.

Next week is The Bluetones.

The first gig of 2003 turned out to absolutely fantastic. We went to see The Broken Family Band, Herman Dune, and Of Montreal at the Portland Arms. All three bands were great, but Broken Family Band stole the show with their mixture of Crowded House style jangles, country affectations, and tongue in cheek humour. They’re a local Cambridge band and seem to be destined for big things – keep an eye out for their EP

Herman Dune were very different. A strange mixture of the Velvet Underground and They Might be Giants they sported some regulation length CAMRA beards and made for a fun and interesting kind of band.

Of Montreal were more typical Indie rock and ended the night with the crowd going wild, which wasn’t bad considering the venue was smaller than our living room. Very much a standard punky sort of thing, they had a great sound and seemd to enjoy what they were doing. Ending on Black Sabbath’s War Pigs made sure that we all left feeling pretty high. Those of us who knew what War Pigs was – naming no names, of course…

Bad Behavior has blocked 234 access attempts in the last 7 days.